Palm oil was first brought to Europe from Africa during the Georgian era and soon established itself as a valuable raw ingredient in soaps and cooking. The port of Liverpool dominated the trade, complemented by its proximity to the factories of Britain’s industrial heartland.

Today palm oil provides a third of global edible oils and is so cheap and ubiquitous that has been blamed for many of the words’ evils, not least the deforestation of the rainforest. Yet, as the environmental campaigner Jonathon Porritt has stated, sustainably-grown palm oil is far better ecologically than alternatives like sunflower, rapeseed or soybean oil.

But not many realise that palm oil was once used as beneficial alternative to undermine slavery. Two centuries ago the palm oil trade had a major impact on both the development of African society and the development of British imperialism.  Trading in palm oil in Africa was encouraged by the British government after it had outlawed the ‘triangular trade’ to its colonies. But regardless of the legal status of slavery in the British Empire, demand for slaves remained unaltered in the Spanish and Portuguese colonies, America and within the kingdoms of West Africa itself. Britain promised subsidies to the Niger Delta kingdoms that swapped slavery for the cultivation of palm, a native plant that grew in the tropical forest there. For without substitutes, the local rulers who had previously grown rich supplying British slave ships would simply find other markets that still allowed human trafficking.

By the 1830s there were six major Liverpool firms who were growing the African trade in palm,bringing it home to supply the raw mater (although illicit slave trading with the colonies in South America continued for a few decades.)

This brings us to John Johnson Hamilton, who led one of the Big Six palm oil companies of Liverpool.

He was born in Jamaica, the son of Robert ‘Bang’ Hamilton, a man of local standing, warden of St Andrew’s church, and a plantation attorney-manager. He worked for Sir Edward Hyde East MP, an absentee landlord with 1,200 slaves in coffee and sugar plantations in St Andrew, St Mary and St Thomas-in-the-East under Bangs’ control. Cundall’s History of Jamaica says that he got his nick-name from his fondness of firing off explosions of black powder, and was the model for ‘the excellent Aaron Bang’, a lively character in Michael Scott’s Tom Cringle’s Log set in Jamaica.

The Jamaican parish registers tell us that his son John was baptised on 27 Oct 1802, the son of ‘Sophia Reallo, a woman of color, by Robert Hamilton.’ She was a freed slave who had probably escaped St Domingue (Haiti) during the Anglo-Spanish war of 1795. Bang and Sophia had seven children raised under ‘the stiff observances of a planter’s life’, surrounded by their slaves on a plantation at Raymond Hall, Maryland, Jamaica. (Slavery within Britain’s colonies was not outlawed until 1834, with government compensation paid to the slave owners.  The freed slaves received nothing, but instead were ‘apprenticed’ to their old masters, under a disreputable system of indenture.)

Brothers John Johnson Hamilton and Robert Horatio Hamilton left Jamaica for England before abolition. They set up a partnership in Liverpool as merchants; around this time Robert took a house at Everton Terrace, Everton. Dissolving the partnership with his brother in 1830, John rented a warehouse at 1 Lower Sparling St, Everton and entered a short partnership with Watson and McViccar trading in the United States of Mexico, at Tampico and Aguas Calientes. He meanwhile developed a new venture with John Somerville Jackson and William Jackson, as merchants and ship owners.  Between 1830 and 1842 they operated between Liverpool and the Kingdoms of the Niger Delta, becoming major players in the palm trade.

In those days before steamships, trade was dependent on the winds. Most British companies were transient visitors to the Delta, but to ensure they had their cargoes ready for their ships’ arrival, Hamilton Jackson & Co were the first company to establish long-term relationships by stationing permanent shipping agents in the Delta.  During the season of trade winds, they sailed there with ‘Manchester goods’, such as fabrics, iron items and firearms, and returned with ivory, boxwood and many barrels of processed palm oil.

As well as being essential in the manufacture of soap, oil was becoming desperately needed for Britain’s industrial revolution, which demanded lubricants for its growing numbers of machines and steam engines. Palm oil imports started to augment whale oil as lubrication and the traders found that 50% to 100% profit could be made on shipments in those early years.

The British government encouraged this trade as a way to entice the Delta kingdoms to abolish slavery in their own lands. Hamilton with his mixed Jamaican heritage would have fully understood and supported the rationale.  But unfortunately for Hamilton Jackson & Co, the reality of the policy ultimately sank their business. In 1842 King Dappa of Bonny agreed to abolish slavery across his kingdom in exchange for a British government subsidy of $10,000. Hamilton’s had traded heavily with Bonny to encourage this and became a major creditor. The King then used his British subsidy as payment against the debt owed to Hamilton’s, but when the company tried to present this credit to the Treasury back in Britain they were refused. It turned out that the locally-negotiated treaty had not been ratified by Parliament, who considered the amount of subsidy to be excessive. This loss heralded the dissolution of the partnership in 1843 and John Johnson Hamilton left the palm oil trade. (Later disputes over oil trading and agreements led to British annexation of the Delta and the creation of Nigeria, but that’s another story – see Gwilym Jones, The Trading States of the Oil Rivers. But at least slavery had been expunged from the Kingdom of Bonny, which had been preeminent amongst the Slave Coast states.)

Hamilton turned his interest to England and invested his wealth in the new joint-stock railway companies which were starting to imprint the country with railway lines. Today we would call him an activist investor, as his large holdings led him to take a close interest in their governance. This sometimes escalated into the courts, and his battle against the badly-run South Eastern Railway Company resulted in a libel case when he accused a director of embezzlement. He ultimately led a shareholders’ revolt that attempted to depose the company’s board of directors.

John Johnson Hamilton retired to the Isle of Wight but died on a visit to Chiswick in 1866, unmarried and childless but very wealthy. In his will he left legacies to his siblings, and was buried in a well-made but plain mausoleum (if any mausoleum could ever be plain!) that he had already constructed for him and his siblings in Norwood Cemetery, South London. The bulk of his fortune he left to the Borough of Liverpool, for charitable purposes.

The Corporation of Liverpool were appointed the executors of his will, which granted them a very generous £25,000 (many tens of millions in today’s money.).  They set up a finance sub-committee of aldermen who commissioned new buildings and enhancements for the health of the growing city. This included assistance in developing the Royal Liverpool Infirmary, Children’s Infirmary in Myrtle Street, and Liverpool Dental School and Hospital, key institutions that went on to form the backbone of Liverpool’s health care today.

There was also an investment of £400 from which the Corporation was expected to draw down on as required to maintain Hamilton’s mausoleum ‘in perpetuity’.

Unlike many other Victorian philanthropists, Hamilton did not specify what works to do or that his name must be attached to them; had he done so, the city might still have recognised him. Instead it was left to his elderly sister Mary: she contracted with Morris & Co for stained glass windows by Ford Maddox Brown and Edward Burne-Jones to be erected in his name in Ventnor on the Isle of Wight, dedicated to healing of hopeless diseases. In her will she added to the investment held by the Borough of Liverpool, topping it up to £600 for ‘properly repairing and preserving the mausoleum’ at Norwood.

Today Hamilton’s mausoleum sits on Doulton Path: it is in a sorry state, with its kerbs and setting unkempt, the door bricked up and the stonework stained and flaking. A few years I led a group of Friends of the cemetery who tidied up the area and removed a tree bough that threatened to bring down the roof. Decades of neglect has taken its toll. 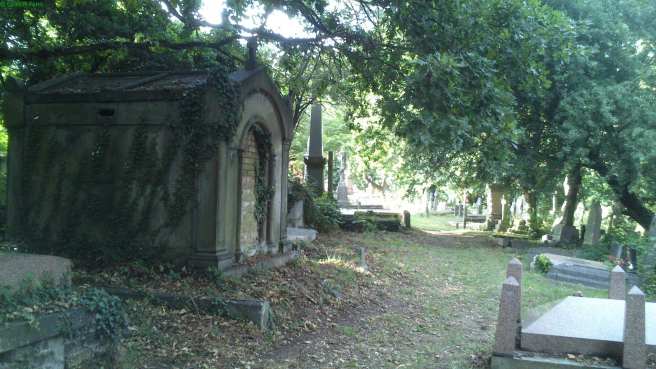 Today no-one from Liverpool remembers this benefactor, an adopted son of the City, a descendant of Caribbean slaves who helped in turn to undermine slavery in Africa. His family’s mausoleum rots as an inconvenient memorial of his gift to the health people of Merseyside.